I stopped at Arcadia Beach 4/27/14 on my trek down Highway 101 along the Oregon coast.    It had been raining and the steps down to the beach were very muddy.  There was only a couple with their two dogs there when I arrived.  I took a couple of photos and then noticed a bottle in the sand, rolled up onto the beach by the waves.

Curiosity kicked in, as it always does, and I walked over to investigate.  It was a bottle filled with rolled up pieces of paper.  I picked it up and could see it was mostly intact, only a few pieces of paper looked a little worse for wear. 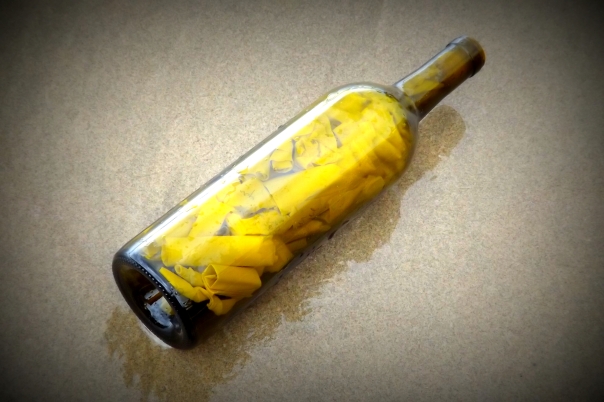 I  couldn’t believe it!  Messages in a bottle, right there in front of me.   It was most definitely a cliche moment for me.  A million questions:  how old was it, where did it come from, what did the messages say, what was it about?  Was it profound?  Was it love letters? Was there money hidden in it?  Or a treasure map perhaps? 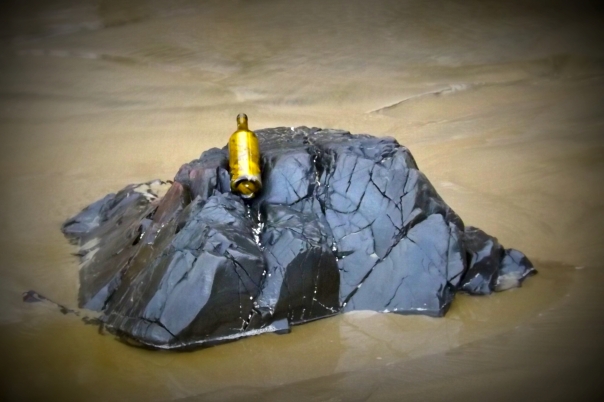 The gods of patience allowed me to wait to bring it home with me two days later where I then carefully and methodically removed the rolled papers one by one from the narrow neck of the wine bottle.

There were 30+ messages from guests at a wedding, sage advice about how to have a happy marriage, and good advice in general about life and happiness.

As I carefully unrolled and read them, I was transported back in time when these messages had been handwritten and then ritually placed into the bottle for this couple embarking on their married life journey together.  Messages of hope, laughter, acceptance, forgiveness, respect, admiration all rolled into a glimpse into that very intimate marriage occasion.  I felt a tribal connection between them, and was  honored to be a participant (albeit removed a bit with time and space) of this ceremony between two people who clearly loved each other, and were loved by those who were there with them their day of union. The group have an apparent passion for the environment and had built up a strong community in their area surrounding that passion.

The paper message from the bride and the groom:

The wedding of Christine Loewe and Ian Miller, July 15, 2006

(It then gave their email addresses)

And on the back:  We cast this bottle into the sea as part of our ceremony.

Excited to be part of a connection in such a mysterious, romantic way, I shot off an email to both addresses explaining that I had found their wedding messages bottle.   I asked what they would like me to do with it, toss it back into the ocean, or send it to them.  I also asked for permission to blog about it.  I got a response from Christine nearly immediately.  She was happy to get  my email: “Wow! What an unexpected email. We would love to receive the bottle of messages. I am truly impressed as it has been nearly eight years since we were married on the beach at Salt Creek outside of Port Angeles. Thank you so much for emailing us! I will indeed take a look at your blog and you are of course welcome to share our story.  Take care, Christine”

She gave me her address so I could return the bottle and its contents back to her and Ian who have been happily married and now with two young sons.

So I am sharing this story with the world.  Things like this don’t happen every day.  Maybe  Ehrmann was right in Desiderata:  “…..no doubt the universe is unfolding as it should. “

Sometimes in life I encounter experiences that shift my paradigm just a little bit, and allow me little snippets of others lives that I would not normally be able to see.  This is how we learn.  This is how we grow.  And this is how we make connections as human beings for the benefit of the entire human race.  I am very grateful to have been the lucky person to be able to pick up that gift from the sand on Arcadia Beach.  I am inspired to toss more of myself to others for the benefit of establishing more of a connection as a group, as a species, as a living being on this thing we call Planet Earth.

I’m adding only a couple of the bottle messages to this blog post as a sampling before I send it back so Christine and Ian.  She hopes to save it to open it up for their anniversary on July 15 this year.  What a wonderful, cyclical idea.  I hope the return of these messages will once again reinvigorate the feelings they felt on the day they tossed this bottle into the ocean.

And for Christine and Ian, here is my advice on marriage as I head into my 27th year of being married.  Always remember the things you love about each other, and don’t dwell on the things you don’t.  Fully developed individuals coming together don’t mean you lose yourself into the union.  It means you can complement each other as life’s challenges ebb and flow like the tide that brought your bottle to me.  I hope that your marriage will travel as carefully and safely as that bottle.

Thanks for letting me be a passerby messenger of your love story.